Brian McKnight is an entertainer famous for his exceptional vocals and musical prowess. The more fascinating is that his lookalike son, Brian Jr. has followed in his footsteps, carrying on the music legacy.

Music icon Brian McKnight is a seasoned vocalist famous for his unique falsetto, among other talents. McKnight carved a niche for himself and became a recipient of several awards and nominations.

Now, his grown son, Brian McKnight Jr., has taken the music mantle and is gradually making a name for himself with his smooth-sailing sounds. 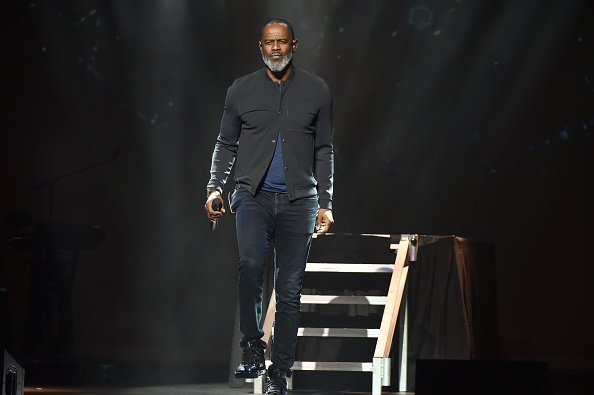 Having grown up listening to his dad, and watching the patriarch hone his skills, it is safe to say that Brian Jr. had enough lessons to prepare him. His music is not bound by genre as he tends to cut across blues, rock, country, electro-soul, among others.

McKnight Jr. became a fan favorite and toured different continents. Together with his younger brother, Niko McKnight, and a pal, Tommy H, he formed his production team, "Care About The Sounds" (CATS).

The group's hit track, "Marry Your Daughter" was a huge success that garnered over 52 million views on YouTube.

Can I trust you enough to tell you everything?.. 🧐 📸 x @fiftyclicks.

Besides music, McKnight Jr. is also passionate about fatherhood. On his Instagram bio, the 30-year-old proudly stated his status as a dad. He also makes sure to show his kids off from time to time.

McKnight added that his only fault was letting them have a sense of entitlement.

One of his posts showed him enjoying sweet family time with toddlers as they were photographed lounging by the poolside. Being a family man, McKnight Jr. knows the perfect way to celebrate special holidays like Mother's Day.

Curly, Ashy, and Sassy.🌞. Scroll for what it looks like when you realize you’ve been swimming with your swimmers all day.😹❤️ #dad #dadjokes

Award-winning ballad singer, Brian McKnight might have made good music and passed on the genes to his son, but there seems to be some dissatisfaction concerning his parenting style.

McKnight Jr. broke the internet in a now-removed post after opening up on his dad's shortcomings on fatherhood. In a lengthy write-up, he laid bare his heartfelt thoughts on his father's alleged neglect.

His sister, Briana, followed suit with a post of her own on the same platform as she chronicled a story similar to her brother's while sharing a throwback photo of her and their celebrity dad.

In his own now-deleted Instagram upload, McKnight shared a video labeled "Today's Nonsense" as he clamped down on his children's allegations.

In the seemingly removed video, McKnight admitted having a troubled relationship with his children but he refuted all the claims of neglect while stating that he made sure to provide all their needs.

“Knowing where you came from begins with yo’ mama nigga!” Ancient Proverb I read somewhere. 😹🧐. On another level though, I’d be no where without the powerful women I was blessed by God to be raised by, or the mother of my children who continues to go above and, beyond for our little ones. 🙏🏾 Words can’t describe how thankful I am, and I’ll spend a lifetime ensuring that they all know that! I love you like that first breath in the morning! Happy Mother’s Day, to mine, and yours! ❤️🤘🏾#ohana #teamelaine #gramabrooks #mynana #MyRidahAuntieCheryl #mynewmamaloridana #Lboogiethegreat

McKnight added that his only fault was letting them have a sense of entitlement. The star singer made it known that he gave his kids everything they needed.

The 51-year-old shared that their relationship became strained because he cut his adult sons off at 25 and 22 so they could become independent.

Getty Images
Relationship Jun 17, 2020
Hank Williams Jr Loses Daughter in Crash — Meet His Other Kids Who Follow in His Footsteps

Getty Images
Coronavirus May 25, 2020
'Queen' Guitarist Brian Was near Death after Having a Heart Attack Recently
Top news
Sep 26, 2020
Edward Furlong Was Fostered by Relatives and Sued for Emancipation — inside His Upbringing
Sep 26, 2020
Kate and Oliver Hudson’s Biological Dad Publicly Disowned Them — Look Back at the Family Drama
Sep 26, 2020
Katie Holmes' Scientology Journey Including Kidnap Fears and Its Impact on Her Daughter
Sep 25, 2020
Jeremy Roloff Left LPBW in 2018 — Glimpse into His Life and Family Today
Sep 25, 2020
Tracy Morgan's Sister Said He's Never Been a Nice Person — inside His Family Drama
Popular articles