Fans have always seen Jinger Duggar's adorable 1-year-old daughter smiling in pictures, but this time, they were surprised to see that the toddler looked anything but happy.

The Duggar family is back with brand new episodes of their reality show "Counting On" and fans could not be any happier.

Jinger Duggar and her husband Jeremy Vuolo have been over the moon ever since their daughter Felicity was born. The duo often shares their delightful moments with her in their Instagram posts.

Happy Birthday, Momma!! 🎉 You are my biggest hero, the one I look up to the most, the one I can share anything with, my best friend, my nurse, biggest cheerleader, teacher, master chef... the list could go on and on.... but above all, you have been my spiritual mentor, the one that continually points me back to Christ! When I am down you comfort me and pray with me, when I am struggling you’re there to challenge and encourage me! I love you so much and am so privileged to have a mother like you! You are priceless! ❤️ Happy Birthday, Mom! 🎊 I hope this is the best one yet! 🤗

Fans love to see 1-year-old Felicity on Instagram, always showering the little one with love through their comments.

However, a recent post by Jinger's sister Jana prompted fans to be concerned about Felicity because she hasn't smiled in those snapshots like she always does.

Felicity wasn't smiling in the photos, but many fans showered the little one with love in the comment section anyways.

However, there were some users who could barely recognize the 1-year-old.

Meanwhile, other fans could relate to Felicity's expression, with one of the fans saying that she looks like someone who realized it's a Monday. 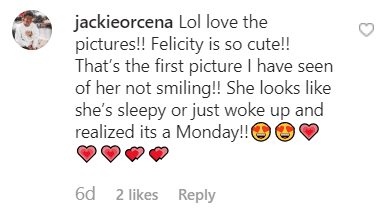 Some of the fans simply thought she didn't look like herself.

JANA OPENS UP ABOUT HER SINGLE STATUS

In a new episode of "Counting On," the 29-year-old reality star opened up about being unmarried at this age. All of the Duggar girls her age are married.

Jana revealed that a number of guys have asked her out but she couldn't really connect with anyone.

Happiness is a new dress on a sunny beach! ☀️ . Get 15% off from @mountainaireboutique with code JANA15 ✨

Although marriage has not been in the cards for the reality star, there have been rumors about potential suitors over the years.

One of such rumors is that of Lawson Bates, a fellow Christian fundamentalist from the show "Bringing Up Bates."

Although Jana has never confirmed that they have something going on, the rumors are still going on.

Bates is not the only one who has been linked with Jana. Former NFL player Tim Tebow was also considered a potential spouse for the reality star.

A lot of you have been asking where my dresses are from! This one is from @citrusandlemon. They have a lot of cute, stylish clothes! You can use the code JANA for 15% off.

As far as choosing a husband goes, Jana revealed that she feels like every courtship doesn't necessarily end in marriage.

instagram.com/jeremy_vuolo
Relationship Aug 24, 2019
Jinger Duggar's Husband Jeremy Agrees with Fan They Should Have Their Own Show on TLC

US News Jul 27, 2019
Jinger Duggar Wears Pink High Heels with Her Husband Jeremy Vuolo (Photo)
Top news
Jul 07, 2020
Fredi Washington — Remembering the 30s Movie Star Who Refused to Deny Her Biracial Heritage
Jul 07, 2020
Creflo Dollar Is a Husband and Father of 5 Kids — Glimpse into the Televangelist's Family
Jul 07, 2020
Mandy Moore's Mother and 2 Brothers Came Out Years Ago — inside Her Tight-Knit Family
Jul 07, 2020
Colin Kaepernick's Adoption Story Has Been a Constant Journey since Childhood
Jul 07, 2020
Morgan Stewart Is Dr Phil's Future Daughter-In-Law — Everything to Know about Her
Popular articles